Just hover over most of the items you are interested in exploring, where we have more information. You can click through to find out more about its history and how it got here, it’s location and compass bearings to help you get the most from your dive and view some of our many photographs of each underwater feature. Some of our more popular features have fantastic 3D models, produced using photogrammetry by Martin Davies.  You can explore these features , using your device to carry out a virtual dive. 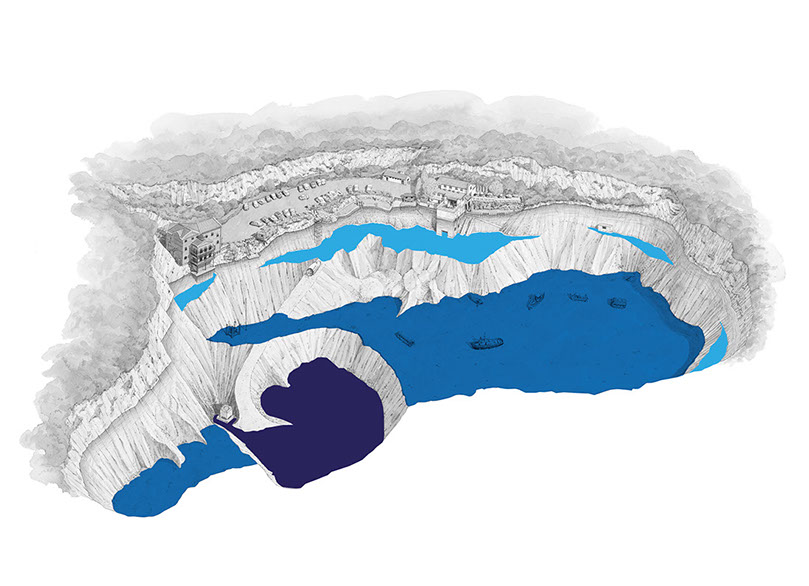 Plan your dive at Stoney Cove

There’s an underwater world waiting to be discovered in Stoney Cove. The terraced dive areas are graded to reflect ability, with depths of 7 metres (entry level), 22 metres (intermediate) and 36 metres (expert). Don’t be tempted to dive too deep too soon. There’s plenty to see at all depths. It’s vitally important to remember that the climate has a dramatic effect on diving conditions throughout the year. Before taking the plunge, consider the following useful information… and plan your dive.

Who: All divers (including trainee divers accompanied by an instructor or other suitably qualified diver Where: Adjacent to the car park, on the north side of Stoney Cove. Getting there: Accessible directly from the bus stop, Eddy’s Quay. What’s there: This 7-metre deep shelf provides excellent shallow-water diving in the warmest thermocline with bright light conditions. Look out for the following: (Numbers relate to the appropriated picture) (numbers in brackets refer to the map)

Interested in wreck exploration? This is the perfect place to start. The cockpit rests on the top of the roadway that leads down to deeper water. Submerged in Stoney Cove as part of a joint rescue services training exercise, it is now crewed by some of the larger fish – pike and perch can often be seen keeping watch on the flight deck.

Jules Verne’s vision of an underwater realm is now a reality. The Nautilus – Captain Nemo’s sub – rests patiently on the 7-metre shelf. Ten metres in length, with a menacing bow and a massive propeller at the stern, this unique piece of diver art – entirely constructed of steel – is well worth a dive.

3. Archways beneath the pub Map ref 3

The archway and windows beneath the pub were originally built by Italian POWs, as part of the quarry stone- crushing plant. On a sunny day, light streams into the dark interior. Freshwater crayfish are often found here. But please don’t touch – handling may kill them.

The ship was an armed Elizabethan merchantman that sank to the bottom of the River Thames over 400 years ago. Its new home is Stoney Cove, where it has now become part of a unique underwater museum for visiting divers as well as a practical survey site for students of underwater archaeology.

Who: Advanced trainees accompanied by instructors; newly qualified divers with experienced dive leaders; advanced divers. Where: There are two areas. The first and larger area is next to the 7-metre shelf (south of the pub), directly down the cliff face, while the second is at the western end – often called the Bowl or Top Basin. Getting there: The first area is accessible directly from the bus stop or Eddy’s Quay. To reach the second area, go to the right from the bus stop. What’s there: More than 60% of Stoney Cove is about 22 metres deep. These areas provide good intermediate-level diving with varied terrain and spectacular cliffs, with light levels ranging from good to dark. Here are a few of the many features you may see:

The wreck of a Wessex helicopter sits close to the northern cliff face. Flown for just 650 hours, it was in immaculate condition before the rotor blades were detached and it was plunged in Stoney Cove. Souvenir hunters have plundered the helicopter, but it remains an excellent wreck to visit, particularly as an introduction to deeper diving.

The bus sits in a flat, silty area, 25 metres away from the edge of the cliff that drops down to the 36-metre area. Its large open window and skylights make the bus an excellent swim-through. (Look out for Rodney and Rodette!) Swim above the silt to prevent stirring it up and reducing visibility… Finding the bus is a navigational challenge. We’ve even been accused of moving it.

Its exact whereabouts are unknown, but Stoney Cove’s resident beast, Nessie, can be easily identified by its green skin, yellow spots and Mona Lisa grin.

The remains of the Galleon lay in 5 metres of water on a ledge in the far south-east corner of Stoney Cove. This reproduction of an ancient wreck, constructed by the Midland Underwater Archaeological Group from 17th-century timbers was convincing, but time has worn it down. Look out for the canon.

These are superb wreck dives in the area known as The Bowl – a 20-metre-deep shelf in the south-west corner of Stoney Cove. The first sign you’ll see of the small Partenavia aircraft (8) is its tail, which touches the cliff face at a depth of 18 metres. Nearby, the wreck of a wooden boat (14) rests on a steep slope 20 metres south.

The Stanegarth arrived at Stoney Cove in June 2000. It’s a steam-powered tug, built in 1910, which makes it older than the Titanic. Lying roughly east-west, with her anchor and chains played out towards the shore and perfectly upright, Stanegarth is one of Stoney Cove’s most popular diving features and the UK’s most dived wreck. To dive her is a joy, with access to the chart room, wheelhouse, engine room and aft cabin. A buoy attached towards her stern marks her position.

Designed to carry a driver and ten infantrymen, the APC, or the Tank as it is now known, was built in 1964 and was based at Ludgershall. It was withdrawn from active service in 1971 and then went on to be used in vehicle trials. Its vital statistics are 5.11m x 2.82m x 1.88m, it weighs 8 tons, was equipped with a Rolls Royce engine and was once used for transportation, river crossings and winching tasks.

The tugboat Defiant is a pretty Dutch tug with an interesting war history. Rumour has it that she was the escape vessel for two men escaping to England during World War Two. At 14m (46ft) long and 20 tons she is smaller than the Stanegarth, but she is superb. Discovered ashore at a farm in Warkworth on the north-east

coast, she was brought to Stoney Cove in 2009 and sank along with our usual fanfare on 17 September. It is possible to swim into the wheelhouse and engine room, but be aware that the space is very confined.

Belinda is a small steel-hulled trawler that was abandoned after a round-the-world trip fizzled out. She once earned her living netting fish in the North Sea. Belinda has a sturdy wheelhouse and still carries her net winches and trawl gear. She slid beneath calm waters of Stoney Cove on 4 June 2010.

Who: Very experienced and expert divers. Where: Directly in front of the Dive Centre and Underwaterworld Megastore. Getting there: Follow the road down from the bus stop or surface swim to the right and descend the Hydrobox buoy line. What’s there: The sump or bottom of Stoney Cove provides an ideal training or practice environment for advanced and expert divers. Here, the water temperature is about 5oC and the light levels can vary from good to zero. The area is quite large and has a fairly flat bottom surrounded by spectacular rock piles and cliffs. But beware the deep silt, which can reduce visibility to zero. The major attraction in this area is:

An orange buoy marks a line leading down to the deep Hydrobox – a large metal structure some 5 metres tall. There’s a round entrance on top of the box, designed to provide a dry working environment for welding and other tasks. If the lid is closed, the box can be filled with air, allowing divers to enter through the gap between the floor and the sides. Look out for the massive ballast weights that keep the box firmly on the bottom of Stoney Cove.

During a very snowy week in February in 2017, our friends from 21 Engineer Dive Team gave us a helping hand and lifted the Bell to the surface ready for its move. During a blizzard, the Bell was carefully towed across the lake and lowered into position, 25 metres west of the Hydrobox – the final move in a massive project. The Shiers Bell now stands proudly at the bottom of Stoney Cove as a testament to the epic work carried out by divers during construction of the Thames Barrier during the 1970s. Our thanks go to everyone that contributed to this project and especially to Tim Prince. A leading member of the oldest established scuba diving club in the UK – The Birmingham Underwater Exploration Club – Tim introduced us to The Shiers Diving Bell in the first place. Cheers! 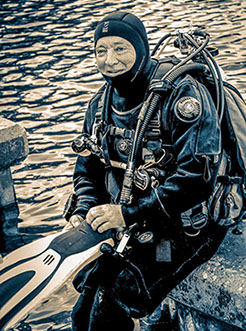 Andy has been diving at the Stoney Cove for over 15 years and now teaches here, we asked him to put together three dives for each level of diver he works with.
The following are guides of what to look out for during each dive, it’s expected duration and why he likes them.
Thanks Andy

We have played host to the cast of Springwatch and many other filmmakers eager to capture on film the native species that thrive in the waters of the cove. As the native crayfish become increasingly more threatened in the UK by the non-native American signal crayfish our own population becomes ever more precious.

Northern pike are most often olive green, shading from yellow to white along the belly. The flank is marked with short, light bar-like spots and a few to many dark spots on the fins. We have big Pike at the cove.

European perch can vary greatly in size between bodies of water. They can live for up to 22 years, and older perch are often much larger than average; the maximum recorded length is 60 cm

European freshwater crayfish, and the only species of crayfish native to the British Isles. Its common names include white-clawed crayfish and Atlantic stream crayfish.

Has a habit of creeping up on unsuspecting divers, likes to nibble fins.